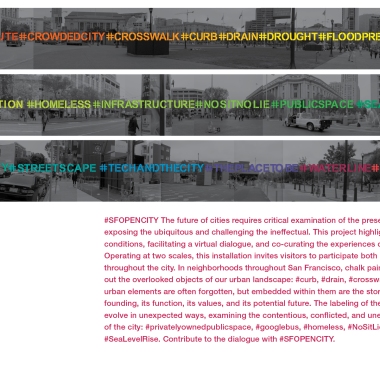 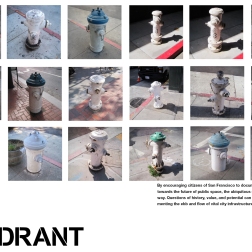 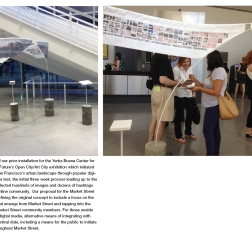 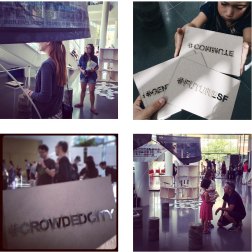 Exhibition at the Yerba Buena Center for the Art, October 2014 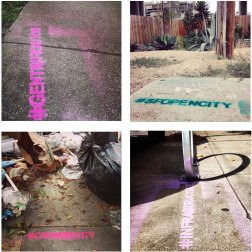 The future of cities requires critical examination of the present urban condition, highlighting the brilliant, exposing the ubiquitous and challenging the ineffectual. This project highlights these conditions, facilitating a virtual dialogue, and co-curating the experiences of urban citizens. Operating at two scales, this installation invites visitors to participate both in the gallery and throughout the city. In neighborhoods throughout San Francisco, hashtags emerge, calling out the overlooked objects of our urban landscape: #curb, #drain, #crosswalk, #bench. These urban elements are often forgotten, but embedded within them are the stories of the city’s founding, its function, its values, and its potential future. The labeling of the ubiquitous evolves in unexpected ways, examining the contentious, conflicted, and unexamined potentials of the city: #privatelyownedpublicspace, #googlebus, #homeless, #NoSitLie, #drought, #SeaLevelRise. Within the gallery space, large-scale prints and touchscreens reveal the images and experiences of the city, as recorded and evaluated by its local community.

This project is designed to engage urban citizens with their city, by bringing greater awareness to the objects, terms, and debates regarding their urban environment. The participatory installation operates simultaneously within the gallery and throughout the city. It creates a feedback loop between stakeholders and decision-makers regarding the future of cities, engaging the public with a greater understanding of the impacts of design, planning, and policy. For community members not operating in the digital sphere, physical ‘tagging’ provides an opportunity for individuals to participate in the dialogue through chalk markings of their urban landscapes.

#SFOpenCity represents an innovative art installation that combines digital and physical components for a participatory exhibition with real impact on the processes that shape our built environments. The initial phase of the project was exhibited in October 2014 at the Yerba Buena Center for the Arts (YBCA) in collaboration with the Institute for the Future (IFTF) Open City | Art City Conference, yielding hundreds of related images, posts, and tweets within a few weeks’ time. Following that initial installation, funding from both the University of California Humanities Research Institute (UCHRI) and the Hellman Family Fellowship has supported continued research and growth of the digital networks associated with the project. A secondary workshop in collaboration with the American Institute for Architect’s (AIA) San Francisco Design Week festival will be held in September 2015, further growing the impact of the project within the city. More importantly, the techniques employed in this participatory project are cheap, accessible, and applicable to a wide range of urban communities and environments.